Whitchurch and Ganarew parish is situated in a spectacular part of the Wye Valley around the area of the Wye Gorge and falls within an Area of Outstanding Natural Beauty. The beauty of the location has attracted tourists for over 200 years and as a consequence tourism has had a significant impact on the structure of our parish.

Land use within the area has been significantly influenced by its landscape: large tracts of steeply sided slopes are suitable only for woodland and pasture and the southern and eastern boundaries are formed by the River Wye. Most of the parish’s population of about 1200 people from 500 households live in Whitchurch, Symonds Yat West and Great Doward, with smaller settlements at Ganarew, Crocker’s Ash, Little Doward and Lewstone. Farming, horticulture, forestry, tourism, light industry and of course housing, occupy most of the land.

Within the parish we have ancient archaeological sites dating back to prehistoric times including an Iron Age hill fort and ancient industrial sites located on the banks of the river.

If you would like more information about our local history, the Whitchurch and Ganarew Local History Society website contains some fascinating and informative articles.

The Wye has been a major communication highway for centuries and with locally available resources of coal, wood, water power, limestone and iron ore, the area played a major role in the early days of the industrial revolution. There are several nature reserves, sites of protected woodlands and Sites of Special Scientific Interests within the parish, some with flora and fauna specific to our locality.

Boar Hunting on The Doward

In the Late Dowardian period the inhabitants of the hilly region known as the Doward constructed elaborate boar traps in order to supplement their diet.

The trap consisted of a single stone wall built in the shape of a large spiral. In the centre of the spiral was placed a large pointy stone. The boar would be driven towards the entrance of the spiral and once in, would run around and round in ever decreasing circles until it reached the centre. Dizzy from running in circles, it would fall over, bang its head on the pointy rock and render itself unconscious. It would then be caught and butchered by the hunters. The remains of one such trap can still be seen below King Arthur’s Cave. 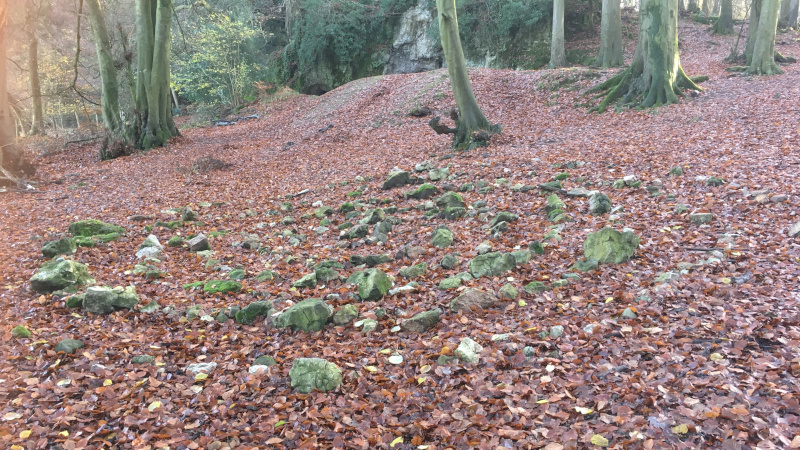 In Late Dowardian society the role of procuring and preparing food was carried out by the womenfolk, while the men by and large ‘worked from home’. News of an impending hunt would quickly spread to places as far away as Gan-yr-rhiw and LLandywynnog, and the menfolk would gather on the cliffs atop King Arthur’s cave to cheer the bare-breasted and tattooed womenfolk on as they drove the boar towards the trap. The woman who caught and slaughtered the boar would be awarded with its head.

Alas, these hunts almost always ended in failure, as the boar would say ‘Sod this’ and head across the river into the safety of the forest. As a result, the people of the Late Dowardian period ate mainly muesli and squirrel meat, much as they do today.

(This text taken from the chronicles of Lambertus Pauli, 11th century welsh monk, and celebrated resident of these parts.)

Nowadays boar hunting on the Doward is carried out with a high velocity rifle. Where’s the fun in that?

If you are interested in exploring this area, the Herefordshire Wildlife Trust has an excellent website with guides to many of the reserves on the Doward.

The natural beauty of the area and its unique terrain offer a wide range of leisure activities from sightseeing to abseiling and canoeing. We have a vibrant business environment with more than 150 local businesses in a location well served by a motorway and major road network.

In common with many rural communities, our parish residents rely on the car for personal mobility and this impacts on diminishing rural public transport. There is an increasing awareness of the need to preserve and enhance existing services and to plan for further community facilities.

Recently Defra carried out an independent review into England’s National Parks and Areas of Outstanding Natural Beauty (AONBs). They believe that our national landscapes can work together better with bigger ambitions to be happier, healthier, greener, more beautiful and open to everyone. This is what their recommendations aim to achieve and they hope those involved in our national landscapes will work together to put them into action. You can read their findings by clicking on the button.

Symonds Yat and the River Wye. The Birthplace of Tourism

Whitchurch and Ganarew Group Parish Council confirms that they have to the best of their ability tested the website and are satisfied that all reasonable precautions have been taken so that it conforms to the latest government accessibility requirements.

External links are selected and reviewed when the page is published. However, the Parish Council is not responsible for the content of external websites.